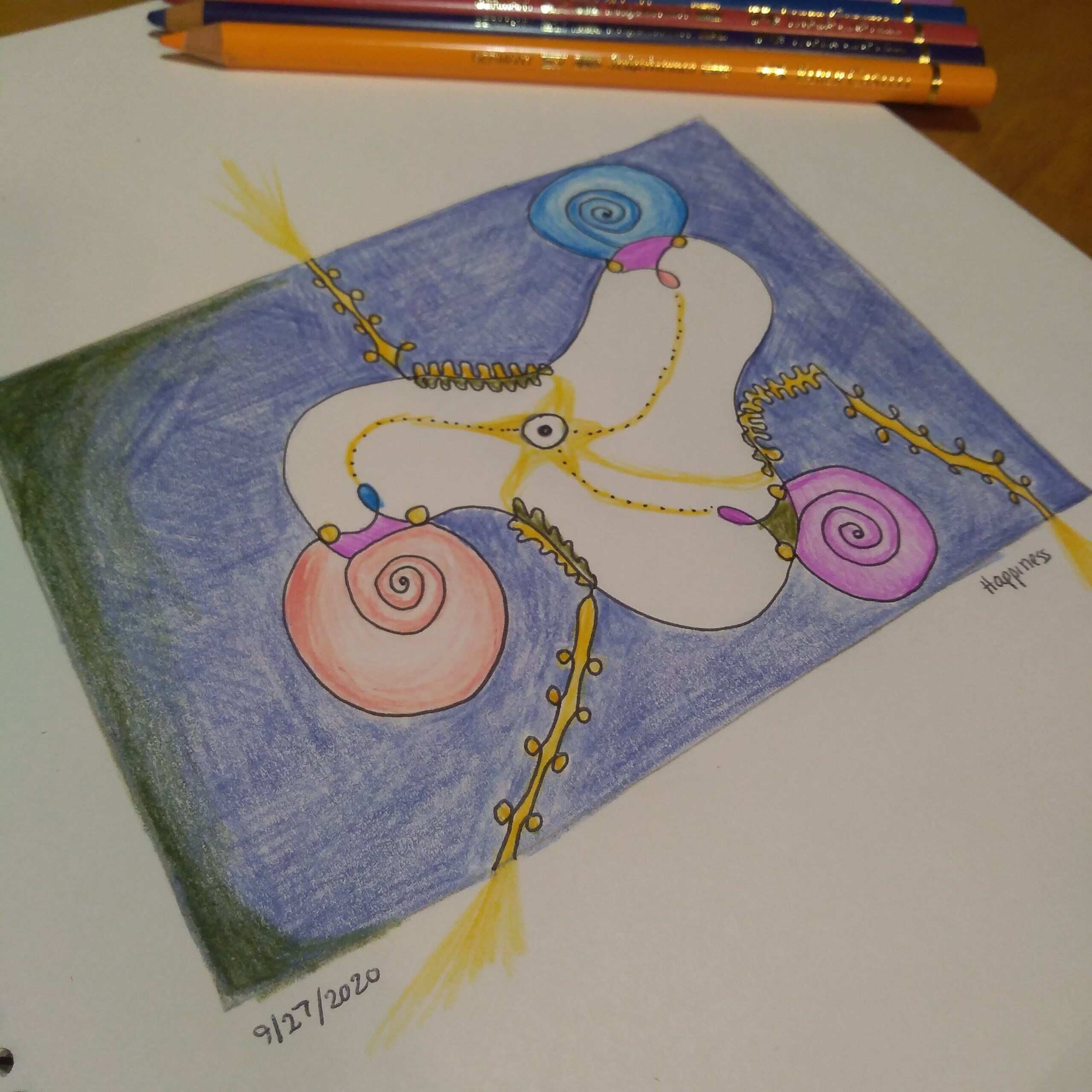 This is what I drew during last week’s Intuitive Art class. What is it, exactly? Happiness. That’s what I wrote in on the back of paper; the sankalpa of that day’s practice.

And with Happiness in mind I followed my own instructions to start the drawing:

“First, make a mark in the center of the page. Can be a dot or a symbol of any sort of small shape.

“Next, lightly pencil in a frame around it. Rectangles are classic, but yours can be a circle, an amoeba or any shape that will define the edge of your artwork.

“And then start drawing. Anything is okay. Don’t think too hard about drawing something specific; simply make marks on the page, maybe connect them, then add flourishes and decoration and color.”

Each mark I made led to the next one. I drew for about 30 minutes without thinking of the end result, but I started to make connections even as I went along. A spiral with a trailing line became three of the same that all touched. I added loops and flourishes, even going outside the frame. As I drew, a flash of insight came to me – the three spirals are my cats, curled up and napping.

I botched the colors of the cat spirals and their little crown-like blobs. I meant to make each one have the colors of the other two in their details. Oops. I fixed it by using a different color on the purple spiral.

Those “mistakes” can be revealing when it comes to reading the messages in the art. What did this one mean?

Right after finishing the drawing, I really didn’t know. In fact, all the greenish parts confounded me. What was that spinachy color on the right? Why did I do that?

Sometimes it take a while for the answers and messages to reveal themselves.

This time it took almost a week. As my sketchbook lay open on my desk just now, I started to realise some things about what I had drawn:

The blobby white figure is shifted to the right of the frame. Even though the circular “me” symbol is in the exact center of the frame, what surrounds me is actively moving counterclockwise and rightward. In my visualisation of time, the Future is toward the right.

Which means the green shading and hovering on the left side of the frame is the Past. That past feels sickly, gross, and heavy. That’s the truth and it even relates to the cats – their brother, Futatsuyama, was killed by a car in early September. It was a sad and heavy moment that I am still adjusting to.

So I have illustrated myself moving out of the past and into the Future surrounded by my cats. Together we are radiating light and illuminating the Present beyond the frame of my own experience. That is Happiness.

And I didn’t even know it. Not when I drew it. Not when I first looked at it and tried to find some insight. It takes a while for those messages to bubble up. Be sure to keep your intuitive artworks on display for some time and let their meanings become clearer. You might be as surprised as I was.